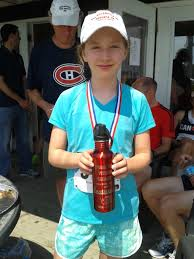 I have some really exciting news, This past winter  I took up the sport of cross country skiing. (Don't worry, it didn't take away from my running.) It's really hard to believe but after 3 months of learning how to ski, I made the Nova Scotia provincial development team for Xc ski!
I did already know the coach though.

So far, being on the team has been a great experience and has been really fun. I've met other like minded peopl. I  have attended 2 training camps so far. The most recent training camp was very fun.
I did lots of roller skiing both skate and classic, running, some yoga, and strength training! My favourite part was also the most gruelling part which was the strength training. It was done on a farm! It consisted of the following really tough  exercises.
-climbing over hay bails
-running a wheel barrow around a slalom up a hill
-doing tricep dips on the bar of a tailer
-throwing split tires om a ring toss
-doing pull ups on a tractor's tongs
-doing lateral jumps across two pieces of wood
-flipping a massive tractor tire
-doing sit ups with a log
-doing squats with a piece of wood across your shoulder
-doing the human wheel barrow  across a field
-running back and forth around a cone with two buckets then doing a burpee. When doing the burpee someone would fill your buckets with water.
All of these exercises were done with a partner. You would do as many reps as possible in one minute, then move to the next exercise. We did two rounds. After the first round, everyone killed themselves. I literally think my arms were shaking... very rapidly. Then we were announced the winners... Who could improve the most between the first and second round. This was great because it's what xc skiing is all about. Any sport really. This was a great workout because it revealed the unknown of our capabilities. We all discovered something new about ourselves. Training camp was awesome! 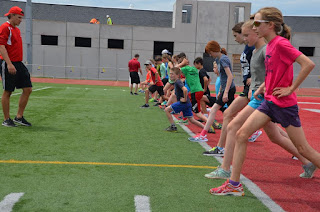 Also at the training camp we had the chance to do a strength \plyo workout with a former CFL player on the track at Acadia university. 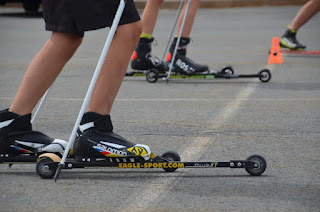 Great shot of getting ready for some sprint starts. 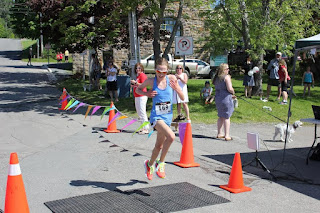 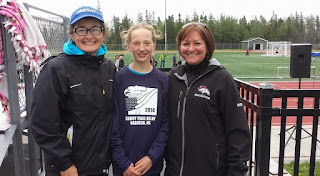 I had a great first year in track with some great coaches. I ran the 800m, 1500m, 3000m events. I won all three events at regionals and set regional track records for the 1500m and 3000m! I then went to provincials and made some PB's.

It's been an awesome year so far!